After almost 15 years of programming life, I always want to swap the Control and Caps Lock with my keyboard. I began to do so because I need to use Emacs , and Control is the most used key in many key bindings in Emacs. I started to experienced Repeated Strain Injury after several years of working, swap these two keys saved me.

Not only in Emacs, we actually use Control much much more than Caps Lock, but Caps Lock is usually put in a better position in most keyboard layouts. This standard keyboard layout began almost at 1984, when IBM PC keyboard introduced Model F (PC/AT).

HHKB is an alternative if you want a keyboard with a default layout that prefers to programmers. If you are a Vim/Emacs user, buy one for yourself!

It’s also easy if you want to swap these two keys.

The easiest way is installing PowerToys, and config it in Keyboard Manager: 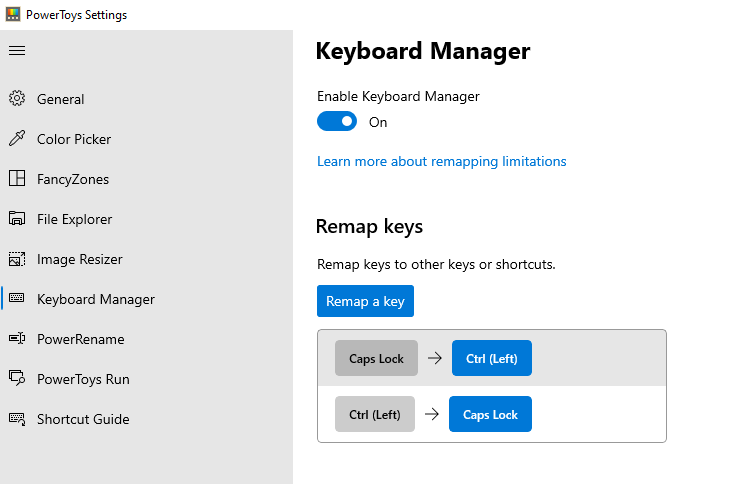 There are some other ways such as using regedit to modify, but I haven’t tried it.

When running XWindows you need to modify the X11 key map using xmodmap. It is not sufficient to just modify the console keyboard mapping. Use xmodmap to load the following keymap file (save in ~/.Xmodmap):

These keyboard settings are not persistent after a reboot. Most Linuxes will load your ~/.Xmodmap file when you log in with xdm or gdm. Some don’t. If not then you should add this line to your ~/.xsession and ~/.xinitrc files (after the shebang #!/bin/sh line):

If you are using GNOME, try to install Gnome Tweak Tool: