Ruby: How to check a string contains another string

One of the most common operations a programmer use on strings is to check whether a string contains another string.

In this post, I will show you several methods for finishing this operation, with a little bit more analysis of the implementation.

1. Using include? method from string

The method named include? will return true or false as result, sample code is:

Regex matching in Ruby returns nil when the expression doesn’t match. When it matches, it returns the index of the character where the match happens.

Another benefit from regular expression: it’s a general pattern match for strings, for example:

You could also use [] in string, the usgage is as below:

Note: You maybe thought [] is actually same with str.index. No, index will return the position of first occurrence, while [] will return a string same with parameter.

In Rails, a more idiom practice is like this:

Note: It’s only available in Rails, and not pure Ruby.

As an aspiring developer, you may curious about how the string matching is implemented in Ruby’s source code.

A little bit dig will find out the related C implementation in source code of string.c: 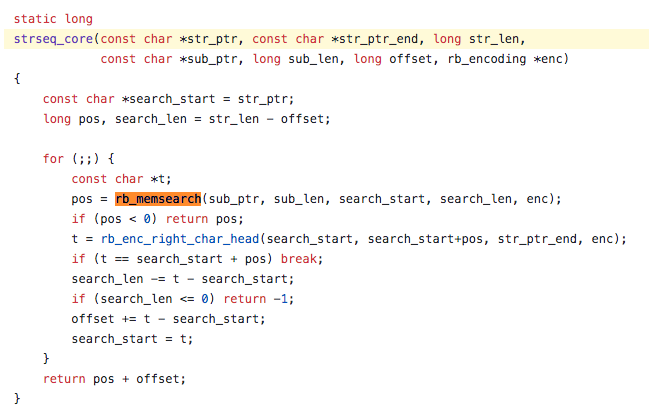 Let’s continue to check the function rb_memsearch located at re.c:

By default, if system have defined a function called memmem, Ruby will just call it directly. The memmem() function is not specified in POSIX.1, but normally could be found in a system like Linux. It’s implemented with Glibc.

Otherwise, If a system doesn’t have memmem, Ruby uses an algorithm called Rabin–Karp algorithm to do string pattern matching. It uses a rolling hash to quickly filter out positions of the text that cannot match the pattern and then checks for a match at the remaining positions.

include?, regex, index could all used to do pattern matching of strings.

In the source code of Ruby, we use memmem or Rabin–Karp algorithm for string searching.