Actually, there are some difficulties with generating random numbers only through computers.

Computers are good at executing determinate tasks and run coded instructions according to the program.

As its name suggests, a pseudo-random number is not truly random in the strict mathematical sense and is generally generated by some mathematical formula (or a calculated table).

For example, a simple Linear congruential generator could be used to generate pseudo-random numbers.

Let’s have a look at Borland’s random number generator:

Please note that the RandSeed will be updated in each generation.

PRNG’s result is random in a statistical sense. The behavior of pseudo-random numbers is predictable, which means if we know the current state of the PRNG, we could get the next random number. 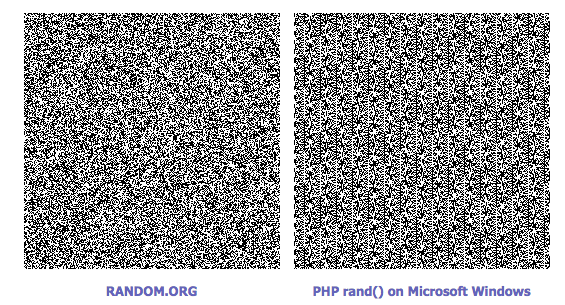 Because of it’s above features, pseudo-random generation’s usage is limited, it’s mostly adapted in programs such as simulation.

The implementation of each operating system is different. On Linux, the root of all randomness is something called the kernel entropy pool.

For example, the MAC address could be used to initialize the entropy pool, other random source includes interruption time, addressing time of hard disk, etc.

Usage of a Random Number

For instance, let’s write a simple program. We know that the random number generated by rand() in C programming language has a range 0~32767. How do we write a function to generate a random number in the range of 0~10?

Maybe you would simply come out with this solution: rand()%10. I’ve also used this approach before, but is it really random?

If you put all the numbers from 0 to 32767 with the operation of %10, you can see that some numbers appear more often, so the probability of these numbers appearing at the end is correspondingly larger. 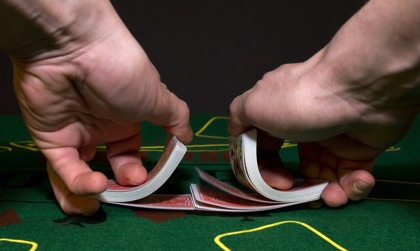 Writing a proper program to shuffle cards seems easy, but it’s not.

That’s a pretty tough thing to have happen if you’re implementing online poker. You might want to make sure that if you’re advertising that you’re doing a random shuffle that you go ahead and do so.

—Robert Sedgewick, Professor of Computer Science
ASF Software wrote a popular online poker game many years ago, in which the shuffle program is this Pascal code:

Let’s look at just the core shuffling algorithm (note the array’s index start with 1 in Pascal):

The shuffling algorithm here has a problem: the probability for the 52! permutations is different.

Let’s take three cards 1, 2, 3 as an example, here is the result after 3 iterations:

We can see that 231, 213, 132 appear more often, so the corresponding probability is also larger.

A simple and elegant shuffle algorithm is called Fisher-Yates algorithm:

Another issue in the above program is hard to discover. A 32-bit number used as a seed is problematic for pseudorandom generators because the behavior of a given pseudo-random generator is predictable.

1. Generate a random number in a range

There are 10 people sitting around a table and they want to know the average annual salary, but they’re all reluctant to disclose their salary to others.

Is there a way for them to get the answer, without exposing anyone’s salary to others?

How We Learned to Cheat at Online Poker: A Study in Software Security.