Caching: From Top To Bottom

Every programmer will encounter this computing concept: Caching.

It is a core and broad concept that every programmer should have a deep understanding of, it’s extremely important for system design and performance-critical programs.

There are only two hard things in Computer Science:
cache invalidation and naming things.
– Phil Karlton

Technologies come and faded, but the principle tends to remain more constant.

In the computing world, ubiquitous technologies originated from the concept of Caching. Caching is designed and implemented in multiple abstraction layers, ranging from CDN, web browser, operating system, CPU and algorithm design.

cachingexplained.com will give you the best and lively explanation of Caching.

From Wikipedia: “A cache is a hardware or software component that stores data so that future requests for that data can be served faster; the data stored in a cache might be the result of an earlier computation or a copy of data stored elsewhere.“

The essential idea of Caching is to use space for time optimization, it’s a trade-off between size and speed.

CDN(Content Delivery Networking) is the crucial Internet infrastructure, implementing the concept of Caching.

CDN improves the loading time of web pages and speeds up on-demand video downloads and streaming. When we are streaming videos of Netflix, instead of fetching the video directly from the central server, the client downloads the video from the CDN node, which geographically closes to us, shortening the loading time.

A typical CDN workflow is:

When the client requests data from the CDN node, the CDN node checks whether the cached data is out of date.

In the context of the Web, users read more frequently than write.

Fetching data over the network is both slow and expensive, thus the ability to cache and reuse previously fetched resources is critical for optimizing performance.

There are a bunch of cache schemas used in the context of HTTP. The most important cache header is cache-control. 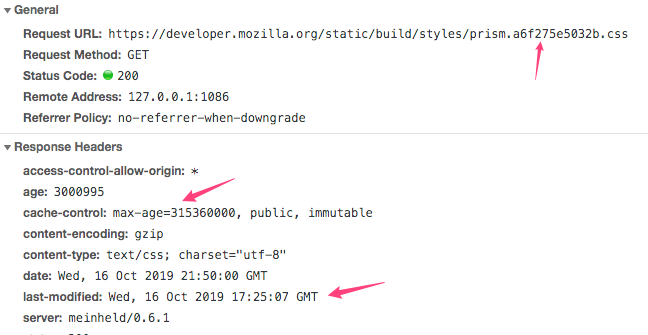 But how we resolve the stale data issue?

The answer is Etags/Last-Modified, the server will check these headers to determine whether the local cache of the client is validated. 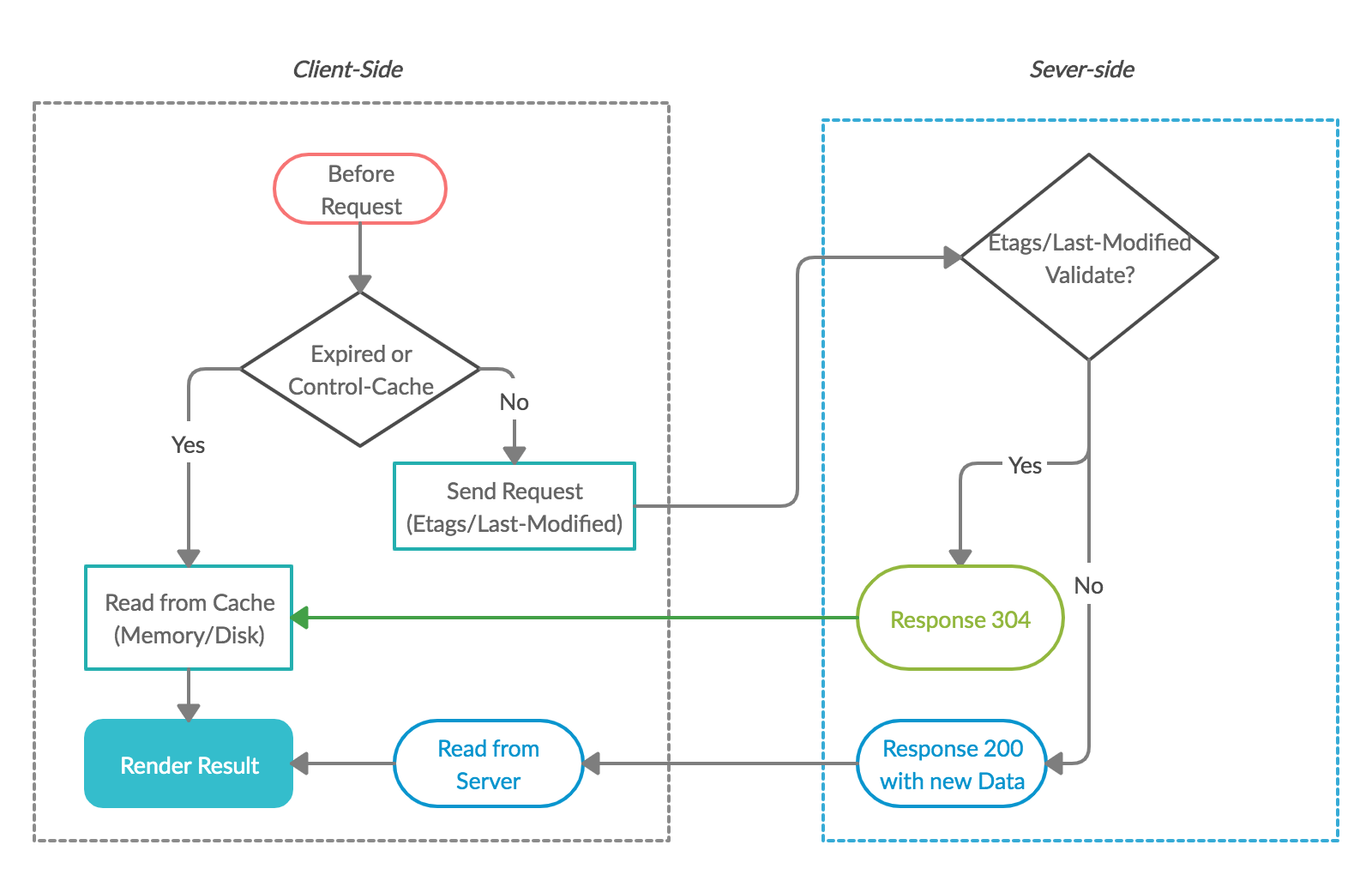 An HTTP response with 304 will be sent if it’s validated, otherwise response 200 with the newest content.

Another solution for expired data is generating a new unique URL for resources, in normal cases, the files of stylesheet files, images in HTML pages, Javascript files will embed a fingerprint in the filename. So that the clients will fetch from the new URL if the server updated content.

Combining the usages of cache-control, Etags, and unique URLs, we can achieve the best: long-lived expiration times, control over where the response can be cached, and on-demand updates.

In practice, Nginx generally used as a reverse proxy or load balancer in front of applications, it can also act like a cache server. A simple configuration for Nginx caching is:

Another point that needs to be noticed here is that we set the size of memory space(for cache keys) to 10m, the cached value is stored in disk with path /tmp/nginx.

The option of inactive=60m used to specify how long an item can remain in the cache without being accessed.

Except for better performance, Nginx cache could also improve the availability of sites, we could use proxy_cache_use_stale options for delivering cached content when the origin is down.

Nginx has other rich features like traffic limiting, content compression, etc. If you are interested in high-performance tunning, I strongly recommend you to read: Nginx High-Performance Caching

Keep in mind, system-call is expensive and data operation on disk(read/write) is much slower than operation on memory. Linux will maximize the use of a computer’s memory for the best performance.

As we can see, there is not much free memory. Even we did not run many applications currently.

Don’t worry, Linux is not eating your memory. The system is just borrowing unused memory for disk caching. This makes it looks like you are low on memory.

When data is written, Linux first writes it to a Page Cache (in memory) and mark the page to Dirty, the content of these dirty pages is periodically transferred (as well as with the system calls sync or fsync) to the underlying storage device.

Let’s run some commands to verify it:

From the output, we could find out after a data writing of 200MB, the Dirty pages in the system grows.

Then if we run the command sync, it will shrink because data in Dirty pages have already synced into the disk.

File blocks are written to the Page Cache not just during writing, but also when reading files.

For instance, when you read a 100-megabyte file twice, once after the other, the second access will be quicker, because the file blocks come from the Page Cache in memory directly and do not have to be read from the hard disk again.

CPU caching was invented to bridge the speed gap between the CPU and main memory. 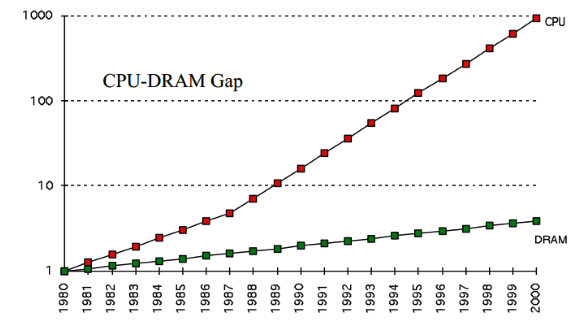 CPU caches are small pools of memory that store information the CPU is most likely to need next. All modern CPUs have multiple levels of CPU caches. Access times vary greatly between each Cache level, the faster level’s cost per byte is higher than slower one’s, also with smaller capacity. Cache L1 is faster than Cache L2, and Cache L2 is faster than RAM. 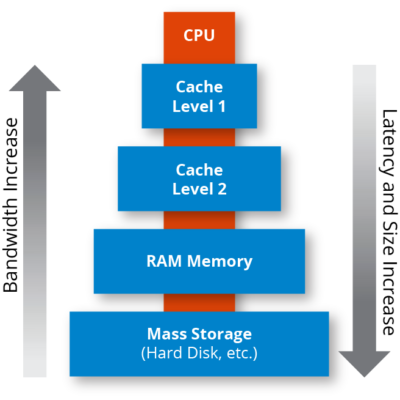 According to the principle of locality, most of the time spent by a program focuses on core operations, and CPU is likely to access the same set of memory locations repetitively over a short period of time.

It’s critical to follow this principle because a high mis-hit ratio on Cache could introduce a performance penalty on the program.

Let’s have a check with these two C functions, what are the differences between them?

Why the first function is almost 2 times faster than the latter one?

Because row-major layout in memory is used by C/C++ compilers, when the data in a[i][0] is accessed, the nearby data a[i][1] ~ a[i][K] will likely be loaded into to Cache.

According to the iteration order, because elements nearby have been cached, we will get a high hit ratio on the cache.

But if we reverse the iteration order into col-major, since the loaded data is not accessed afterward and most data is not fetched from cache, it will trigger a high mis-hit ratio issue and bad performance on running time.

In algorithms design, we commonly store the computed result in a cache for time performance. Let’s have a dig on the classic recursive version of Fibonacci algorithm：

If we analyze the computing process in visualization, we will found out there are some duplicated parts during the computation. Its complexity in Big O notation is $O(2^n)$. 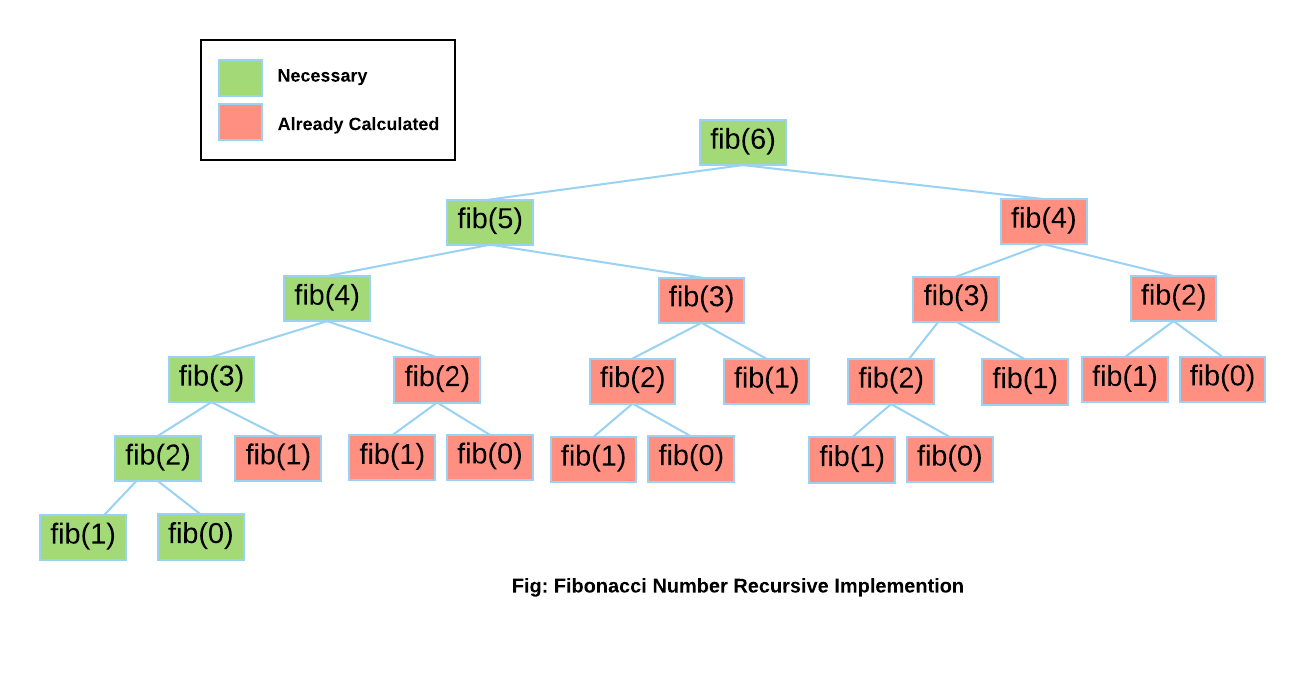 Memoization (top-down cache filling) can be used to optimizing the performance, we use an array to store the computed result:

Or we can use the bottom-top caching filling, which will produce an iterative version program:

The idea of reducing duplicated computing is also applied in Dynamic Programming(DP), the key observation for DP problem is finding the overlapping subproblems, and use cache to store overlapping results.

We have a study on the Caching technique at different layers. Caching is not only a method for architecture and design, but it’s also a general idea for solving problems.

The essential principle is: